Our first inductee is Duane Quick from the class of 1970. Duane participated in all 3 sports offered (football, Basketball, and Track). Duane earned his varsity letter in every sport every year while at North Callaway. He also was a varsity starter for all 4 years in Football at Quarterback and was team tri-captain his senior year as well as being voted MVP. He started 4 years in Basketball where they had a 4 year record of 81 wins and only 25 losses. His team won conference his Sophomore, Junior, and Senior year.  Duane was also voted all conference and all tournament team. In track his team tallied a 16-1-1 record and he qualified for State track in the low hurdles. He was voted male athlete of the year during his senior year. He was a member of National honor society, Freshman class vice president, Student council Rep his sophomore and Senior year, and class President his junior year. Since High school he has graduated Cum Laude from Columbia College with a BS degree in business. He has been married to his wife Jackie since 1977 and celebrated his 38th anniversary last July. He has two daughters Natalie and Rachel, and a son J. Kellen as well as Grandchildren Layne, Lathen, and Kendra. Please help us congratulate our first inductee-Duane Quick 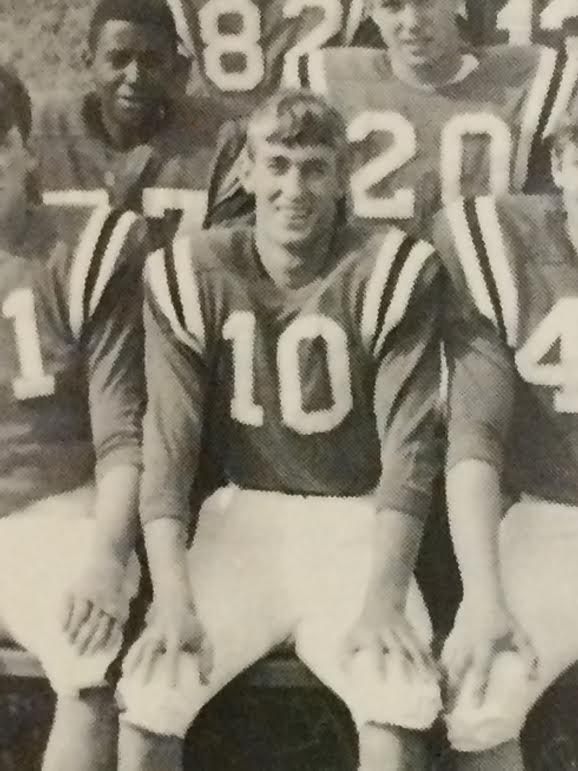 The next inductee is from the class of 1975…Mike Love. Mike was a 3 year starter in Basketball in which his teams accumulated a 3 year record of 61-14. In his sophomore year they accumulated a 26-1 record which is still the most wins and best record to this day. In his 3 years as a starter, he was voted all district 3 years, all conference 2 years, team MVP 2 years, and was the first Basketball player ever at North Callaway to be voted all State. He was all state both his Junior and Senior Year. Mike went on to play 4 years at Westminster College and married 1978 North Callaway graduate Cindy. He currently works at Foster Brothers Wood products in Auxvasse. His son Aaron graduated here in 2005 and his daughter Laura in 2008. Congratulations to Mike Love. 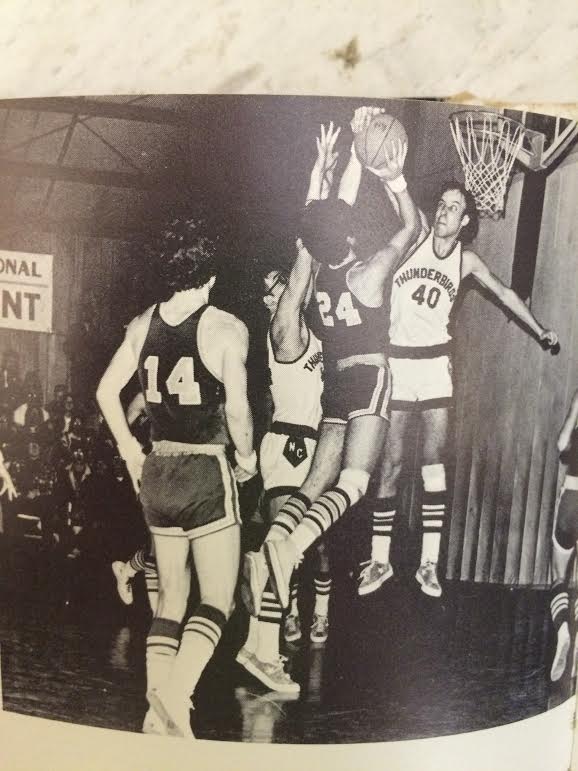 Our next inductee is 1982 graduate Tom Christensen.  Tom was a 4 year letter winner in Football and Track and a 2 year letter winner in Basketball. He was all conference in Football as a running back 3 years and as a punter and linebacker 1 year. He was all conference in Track in various events a total of 10 different times including Conference Champ in High Jump and 110 hurdles. He was all district 7 different times and district champ in High Jump in 1982. 1982 proved to be a great year as he finished 3rd in state in the 110 hurdles, but the crowning feat was when he won the state championship in the High Jump. He is still the current school record holder in High Jump with a jump of 6’6”. He graduated from Westminster in 1986 and resides in Fulton. He is married to Katherine and has 4 sons…Mitchell, Wilson, Nicholas, and Samuel. Congratulations Tom Christensen. 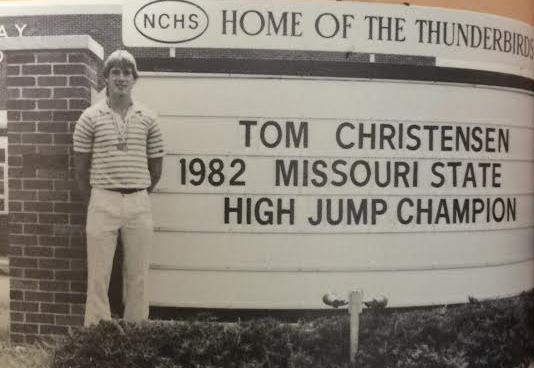 From the class of 1985, we have Paula Primus (Cunningham). Besides being valedictorian of her class, she was also a standout in Softball, Basketball and Track. Paula was an all conference Softball player her Sophomore, Junior and Senior years while her teams won conference 2 of those years. As a Basketball player, she received all conference honors all 4 years, helping her teams to win conference all 4 years. In her Junior and Senior years, the Thunderbirds won districts and advanced to sectional play during the 1985 season. Over the course of four years, Paula scored over 1500 points while wearing a T-Bird jersey.  She was also named all state both her Junior and Senior years.  In track she competed in multiple events and was all conference in the 1600 yard relay, shot put and triple jump. As a team, they won conference 2 years and districts once. In 1984 she placed 2nd in state in shot put. The following year she was state champion in shot put and held the state record. She is still currently the North Callaway record holder in that event. After graduation, Paula attended Mizzou and competed in track. She is married and has 2 girls…Lindsey and Sophie, who both currently play Basketball for Mizzou. Congratulations Paula Primus (Cunningham). 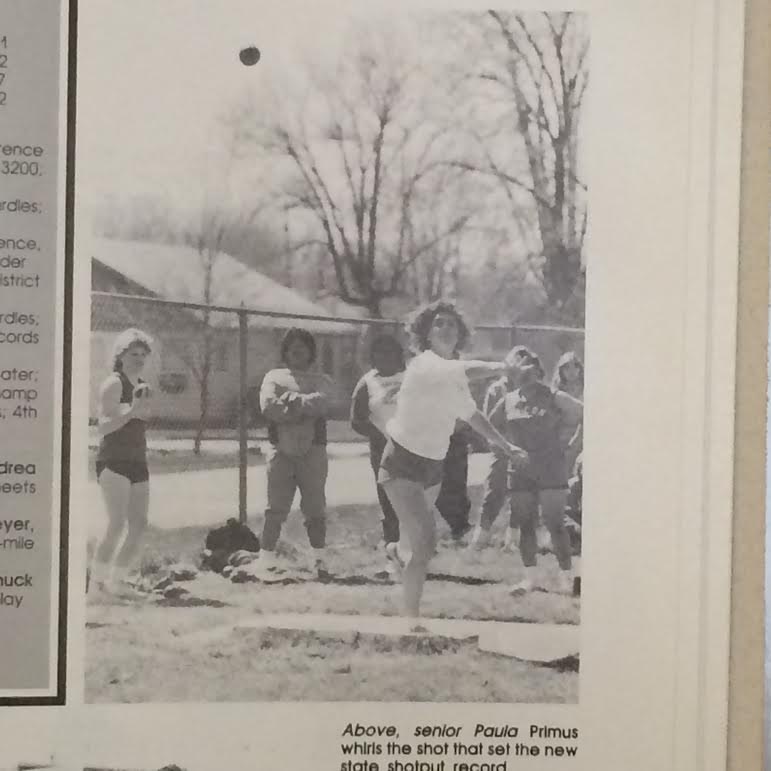 Our next inductee is 1987 graduate Stacy Primus (Hoffman). Stacy was a 4 year all conference softball player. She was also all conference in Basketball for all 4 years of High School, all district for 3 years, and an all state Basketball player her Sophomore, Junior, and Senior year. On top of that, she was very successful in track. In track she was all conference in multiple events for 4 years. She earned all district honors 3 years in the 4 X 400 and high jump. She won 3rd in state in high jump in 1987 and won state High jump in 1986. Her high jump of 5’4” is still the current school record.  She was a member of National Honor Society and the 1987 class Valedictorian. She is married and has 2 boys, Grant is 12 and Gavin is 10. Congratulations to Stacy Primus (Hoffman) 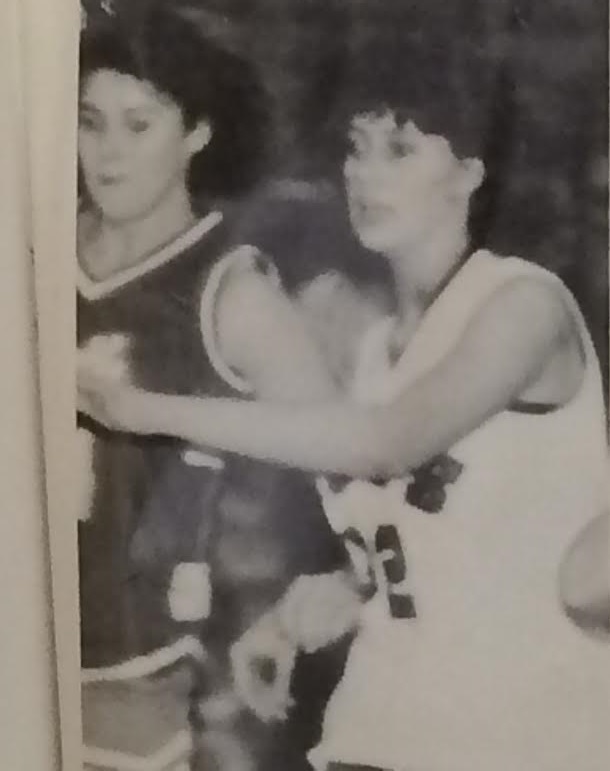 From the class of 1988, we are inducting Missy Vermette (Wilson). During her time at NCHS, Missy participated in Softball, Cross Country, Basketball, and Track & Field. In addition to graduating Valedictorian of her class, Missy held Nine Conference Championship Titles, Ten District Championship Titles, and Five 2A State Championship titles in Track & Field and Cross Country, claiming state titles in the 5K for cross country, and the 800, 1600 (2 times) and 3200 meter races in track. She held All-Conference, All-District and All-State honors for four consecutive years.  She joins a small handful of Missouri athletes in any class with the distinction of holding championship titles for all four (4) distance events in cross country and track in a single year, and one of the few who single-handedly earned enough points in a state track meet to earn team standing. In the fall of her junior year at NCHS, regrettably retiring her softball glove, Missy followed in her brother Chuck’s footsteps, petitioning for and spear-heading an independent Cross County Team which was sanctioned by the school board to run on behalf of NCHS, going on to win the 2A State Cross Country title her senior year. In addition to her accomplishments in Cross Country and Track, Missy received All-Conference honors in both Softball and Basketball during her years of participation. After graduation, she attended Mizzou as a Curator’s Scholar, where she received Big Eight Conference recognition in indoor track, participating in both Cross Country and Track & Field until she was sidelined with a career-ending injury. Leaving an exciting career in commercial real estate development for a many year-hiatus from the corporate world to raise her son and hold congressional advocate and volunteer positions with CureSearch for Children’s Cancer and several other national non-profit childhood cancer research organizations, Missy and her husband, Scott, own a boutique technical consulting/design firm in the Princeton, NJ area, where they reside with their son, Jack (now 13) and two dogs, Chester & Rocksie.   Please congratulate Missy Vermette (Wilson) 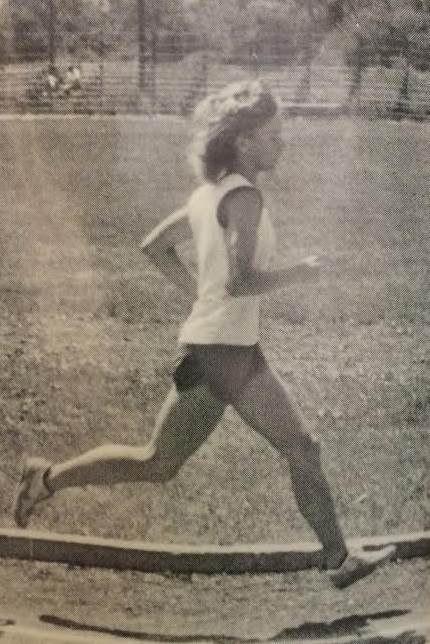 We have 2 inductees from the class of 1999. The first is Jake Baumgartner. Jake was a 4 year varsity letterman in Basketball and baseball, and 3 years in Football. He was a 2 year all conference and all district football player his junior and senior year. His senior year he was named all state quarterback on a team that was 9-1 and averaged almost 40 points per game. He was an all conference Basketball player 2 years and all district Basketball player his Senior year. He scored over 1000 points for his basketball career. He played an intrigal part of the only Boys Basketball team to ever make it to the final 4 MSHSAA Championships. Jake’s biggest success came in the spring during baseball season. He was all conference and all district his Junior and Senior years. He once hit 3 home runs in a single game against South Shelby and pitched a No Hitter in the District Championship game to help the Thunderbirds claim their only district Baseball title. In his High school baseball career, he totaled 22 pitching wins. He had a Senior season 0.87 ERA and was named all state. He was also named North Callaway athlete of the year his Junior and Senior year. After high school, he attended St Louis University and pitched for the Division 1 Billikins as a starter and reliever. He is married and has 2 sons, Noah and Laine. Congratulations to Jake Baumgartner. 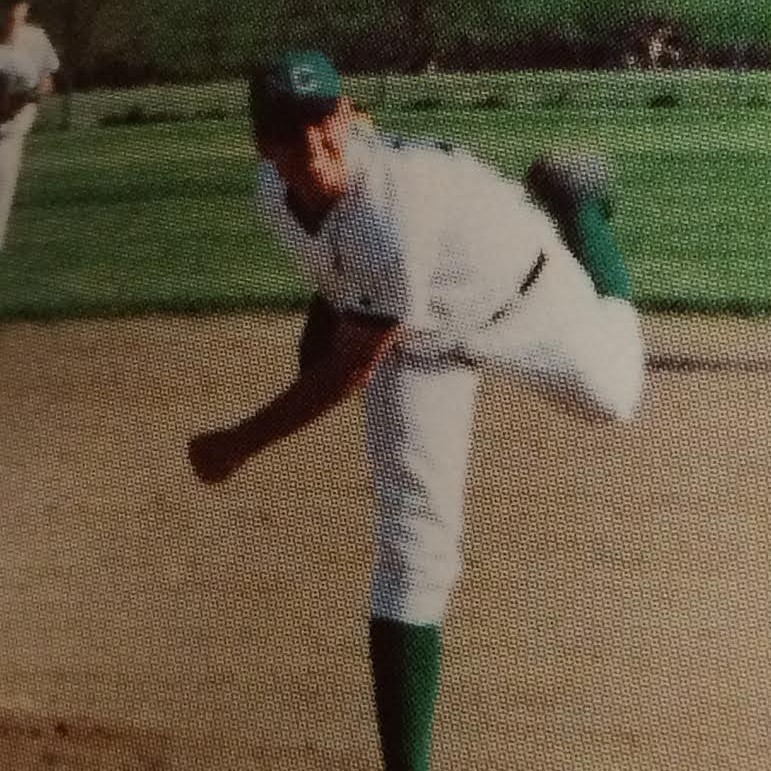 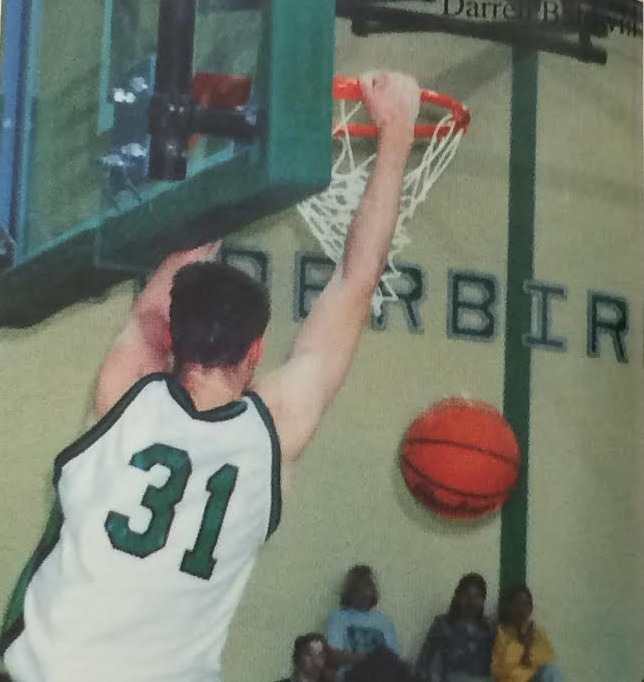 Our next inductee is 2003 graduate Sarah Stringer (Baumgartner)   Sarah was a member of the Softball, Basketball, and Track team. In Softball she earned all conference honors all 4 years, was all district 3 years, and was named all state her Junior and Senior year. In her career, she totaled 104 stolen bases, a .433 batting average, 100 runs scored, and had 122 hits. In her Senior year she had a .564 batting average. In Basketball she was a 4 year starter and earned conference honors 3 years and district honors 2 years. She scored over 1000 career points on the court. She was named Columbia Tribune athlete of the year her Junior and Senior year and North Callaway Athlete of the year her Senior Year. After High school, she played softball for Mizzou and was a 4 year starter earning Big XII honors as well as being named to the Big XII academic team her Junior and Senior years. She is married and has 2 children Noah and Laine. Congratulations Sarah Stringer (Baumgartner) 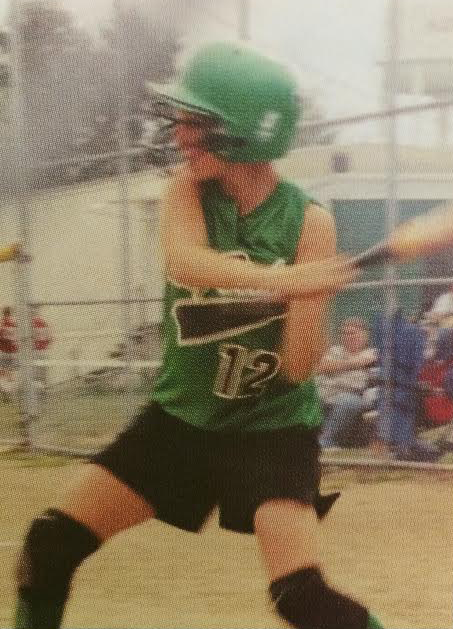 Our final inductee is 2009 graduate Samantha Heck. Samantha was a 3 time all conference, all district, and all State Cross Country runner. In track she earned all conference and all district honors 3 times. She also was a sectional and state track qualifier. Her biggest contributions were on the Basketball court. Sam was all conference and all district 4 years. She was named all state all 4 years of High School. She totaled 2,218 career points, 1401 rebounds, 469 assists, 375 steals, and 222 blocks. After High School she attended Evansville University where she again earned all conference honors. Before graduation, she became the 4th ever player in program history to score 1,300 points and have 700 rebounds. Overall she scored 1,331 points. Please help us congratulate Samantha Heck. 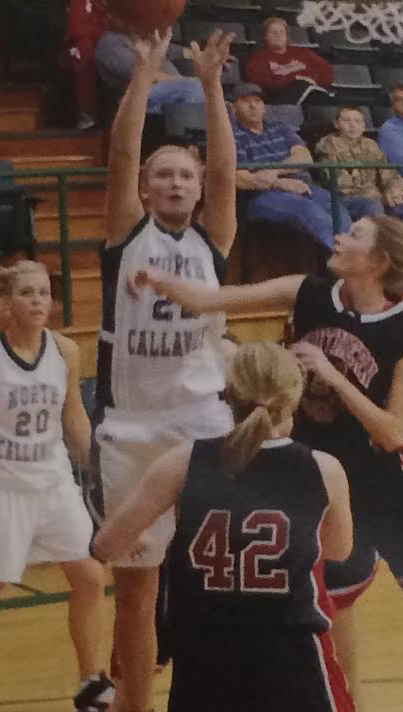 ONCE AGAIN, would everyone join together in honoring the first ever inductees to the North Callaway Hall of Fame. Thank you for making us THUNDERBIRD PROUD! 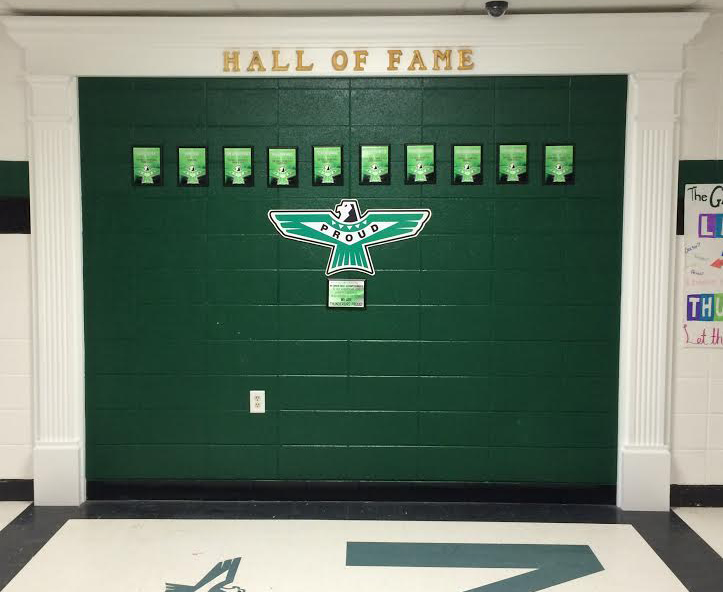 If you would like to nominate someone for future hall of fame recognition, please go to

Look for the Hall of Fame link on the top of the Home Page and find the nomination form. Please submit nominations at your earliest convenience to memmons@nc.k12.mo.us